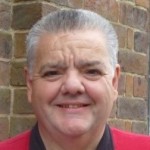 Paul and his wife Adele have been in the Worthing area since 1999. In January 2015 he joined the team as a Pastor after being at the church for four years. Previous to this, he worked for a major national bank alongside serving as a pastor in the Apostolic Church for 18 years. After playing rugby as a younger man he now enjoys watching his team, Wales and reading. He and Adele have two daughters and three grandchildren that keep them on their toes when not at church.